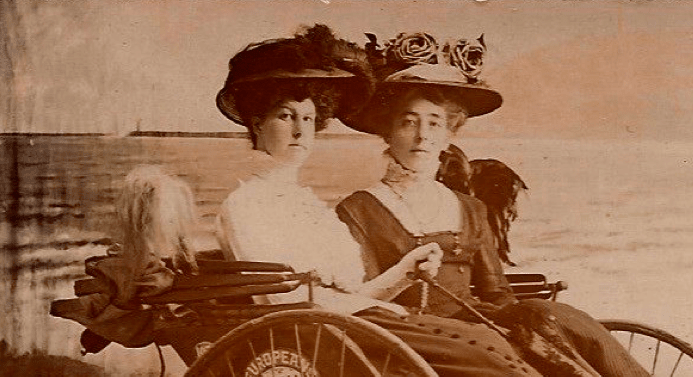 It is more difficult to investigate women than men in your family tree.  Their occupation is often left blank on census forms, as if they were sat around doing nothing. They are less likely to create records such as those associated with buying property, voting or tax.  Luckily Muriel Ching Bowden (nee Finch) told us about Naomi, Auntie Noni, of whom she had few, but very fond memories.

Naomi, the youngest child of George and Rebecca Finch, was born in 1872. We first find her in the census 1881, a scholar aged 8.  She was living in Temperance Cottage (now Primula) in Sticklepath, with her parents, and siblings James (an edge tool maker), Jessie ( a dressmaker) and Thomas aged 15 (‘edge tool maker’s son’). Soon after the census her brother Albany married Mary Trace, they had 6 children of whom only two survived beyond infancy, Alfred and Jessie.

Sadly her father died suddenly when Naomi was 12, so her mother took over running the edge tool business in 1885.  In 1891 we find them still at Primula, with sister Susan and brother Thomas.  Thomas (25) is now an edge tool maker.  Neither Susan (32y) nor Naomi (18y) have an occupation recorded.  Rebecca died in October 1891 and 5 months later Albany’s wife, Mary died.  Muriel thought that Naomi kept house for Albany and cared for the children after Mary died, until his second marriage. This would have been necessary as Albany and his two brothers had taken over the business from his mother, and as he was in charge of sales, he often took business trips.

On the night of the 1901 census Naomi was in Cleave House Sticklepath with her brother Albany and his 2nd wife Georgina, likely helping to run it as a boarding house, though of course her occupation is left blank.  Georgina went on to have two children. Naomi may have helped with the new babies though she did not stay with the family long term.

Muriel explained that Naomi went to South Africa as a ladies ‘companion’ , and likely travelled a great deal with her.  We are lucky to have this amazing photograph – presumably with the lady she was housekeeper/companion for.  The sign on the cart, as well as the studio set up, reminding us of the apartheid regime then prevailing:

The next record we have of Naomi is travelling in 1931 on the Guildford Castle, (a Union-Castle Steamship Co. Ltd ship no 132611, passenger list accessed via Ancestry.co.uk).  Aged 58y she described herself as a Housekeeper and she is travelling from London to Algoa Bay, (Port Elizabeth, South Africa), stating she is normally resident in an “other part of the British Empire”, not England.

Muriel’s fond memories of Naomi are not from early childhood but of her return to Sticklepath aged 77 after ‘her old lady’ had died.  Jessie, Albany’s eldest daughter, now Jessie Barron, went out to accompany her on the way home.  Jessie had to have several new dresses made especially for the voyages.  (When I have been able to check out Muriel’s facts, as here, she has always been correct.)  Here is the passenger list for the Edinburgh Castle (Union-Castle Steamship Co.Ltd no 182892 accessed via Ancestry.co.uk), from Durban, Port Elizabeth, Cape Town and Las Palmas, arriving in Southampton 23 Dec 1949.

Naomi, aged 77 had had many adventures and told many a good story.  She was very amusing and entertaining.  Muriel was sorry when Naomi announced that Sticklepath was far too cold and wet, and that she was returning to South Africa.