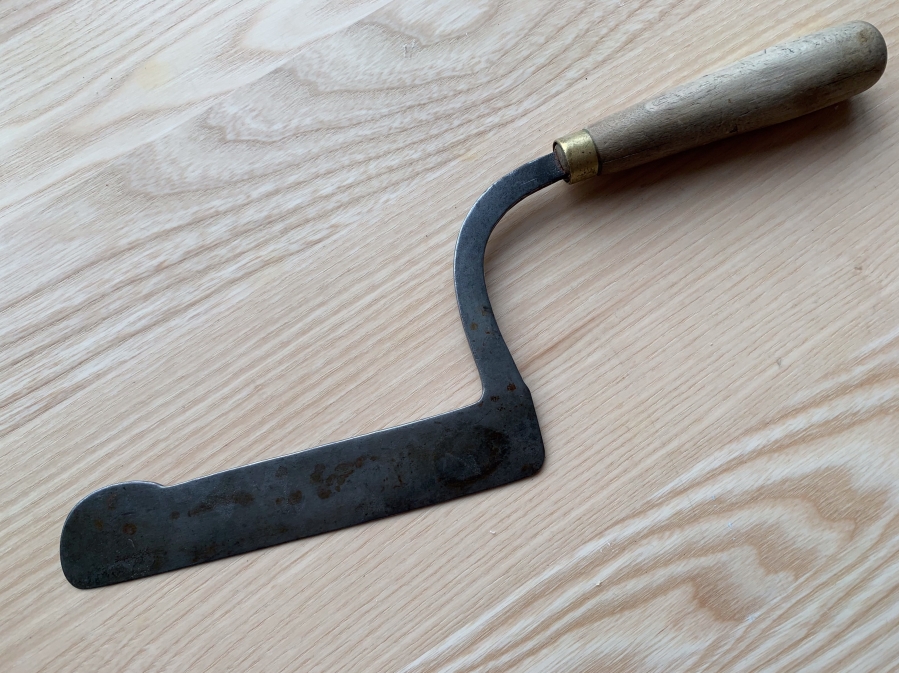 Most of us are familiar with Hash Browns – American fried patties usually served these days with ‘Full English’ ‘Full Welsh’ and probably many other breakfasts. The name and popularity in England probably dates to the 1970s, I don’t think I came across them until the 1980s. However, “hashed brown potatoes” were mentioned by food author Maria Parloa in 1888, which led to popularity in New York hotels during the 1890s. Minnesota Farmers’ Institute Annual of 1835 may be the first time a hash brown recipe was printed. Surely similar recipes were in daily use across the world as soon as potatoes, fat and a heat source were available, even if the name was not used.

My Finch family relatives were tool makers and when my Great Great Grandmother drew the tools for their brochure, a Devon potato chopper was there at number 5. I wonder how long it took to draw them all so accurately?

This implement is usually used with cold (left over) cooked potatoes. They are chopped in a large cast iron frying pan as they are heated up. Lashings of fat – bacon fat or lard saved from the Sunday roast – gives them flavour and makes them very satisfying. There is something of a ceremony about it. The delicious smells wafting throughout the house and the sound of the metal chopper on the metal frying pan. In my childhood ours had an extra ringing sound as the circle of metal securing the handle onto the tool was loose. At the sound expectations started to rise, the anticipation all part of the process.

Once the potatoes are chopped to the cooks satisfaction, retaining some texture, the resulting ‘mash’ is gathered into the centre of the pan. A cold plate is pressed (upside down) onto the mound. Said plate was carefully selected – it had to fit in the pan and have sufficient depth to accommodate this potato mound more or less exactly. No not the best china! Preferably a Pyrex one. Too small and potato went over the side. Too big and the potato would not fill the plate and go brown.

Timing was critical, aiming for a slightly crisp nicely browned surface. As a rule of thumb, once the plate was too hot to touch in the centre, the feast was usually ready. Now the difficult task of turning the frying pan over whilst holding or catching the burning hot plate full of potato. A certain degree of strength is required to do this with a large cast iron frying pan (suitable for an Aga hotplate). Perhaps that is why, in the 1960s, my Dad was always the one to make this. I wonder who did it in Rebecca’s time?

Finally the treasure was brought to the table and divided out. Joy! Certainly a yummy treat to enjoy.

Note – if anyone has a spare chopper, please do give it to the Finch Foundry (National Trust) Sticklepath for their display.