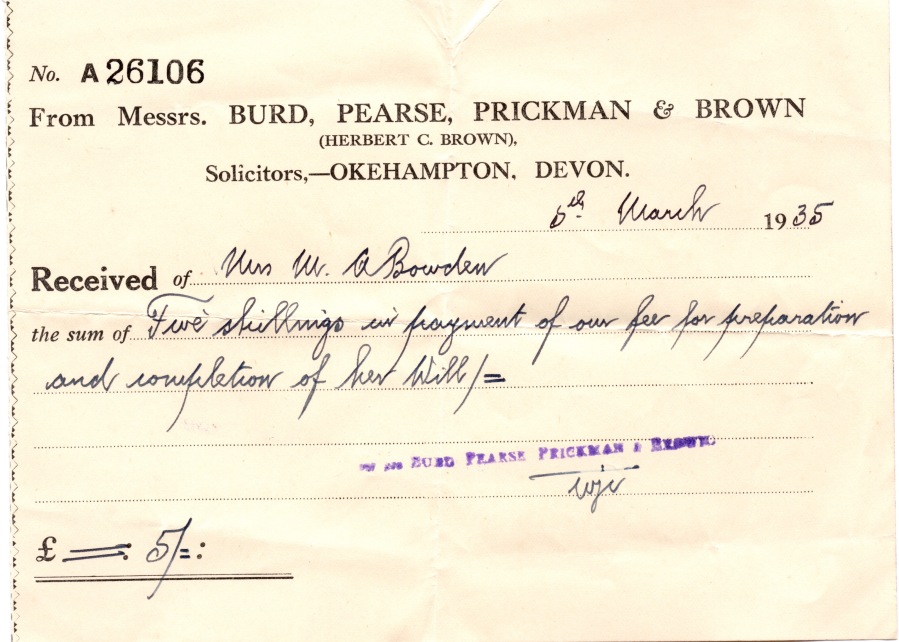 When I lived in Malawi (2010-12) it became very clear that planning for something eg getting a fire extinguisher to deal with any potential fire, was tantamount to inviting the fire to happen. It was difficult to plan anything in advance. Of course the English think differently – or do we? Why do we find it so difficult to write our Will? I will get around to it…. We might not want to think about our own mortality but Covid has rather brought it to the fore. Unlike a fire which we all hope to avoid, death is inevitable, we just hope it is a way off. In the event, it is so helpful to our relatives or friends if it is clear what should happen to our possessions. Of course this can include making a plan for our family history items.

Soldiers were encouraged to make a Will before going into battle. These can be found on Gov.uk in a separate tab section). Admission to hospital for whatever reason can similarly focus the mind. I updated my Will recently after a change of address, but with any change of circumstances (eg grandchildren or family bereavements) you should consider changing your will or adding a codicil to clarify your wishes. However, the costs if you involve a solicitor are very considerable. Do ask in advance is all I can say!

It was timely therefore when I came across some historic receipts and accounts of the costs surrounding creating and administering wills, which I share with you today. I have also been surprised by how many relatives have made or updated their will in their final weeks. ‘Lucky’ to get warning of their impending doom I suppose. My 2x gt grandmother wrote hers but did not get time to sign it.

Wills can of course be invaluable to the genealogist, giving relationships, married names of daughters, occupations, addresses, an idea of wealth and lifestyle, property owned etc etc etc. It can also help create a timeline of events.

In August 1945 Albany Finch, my great grandfather, became ill and clearly realized his life was at risk. We have an unsigned original copy of his last will and testament dated 22nd August 1945, witnessed by neighbours from Ska View Cottages Margaret R Tucker and Frank Richards. From the will we can learn about all his surviving children. In particular, that his son Alfred James Finch, a clerk, was settled with his family in South America.  Albany believed, correctly, that his daughter Phyllis was a civilian internee in Stanley Camp, Hong Kong. There were huge concerns for the safety and well-being of Phyllis who had been serving as a missionary in China and was subsequently interned by the Japanese for the full duration of the war with very little if any communication.

Albany did not live long enough to see the end of the war on 2nd September. He died on 29th August 1945. Phyllis arrived back in England in December. Imagine for her, after the terrible ordeal of a long internment to arrive home only a few weeks after her father died, very sad. It is perhaps only at a time of “lockdown” that we can begin to comprehend the impact of such separations and bereavements, at a time when global communication was far from what is possible today.

There are several other useful sources of information created around a death. The memorial inscription can be informative, perhaps a newspaper obituary, the death certificate, and probate records. Albany’s gravestone mentions his three infant children buried there which we may otherwise not have known about.

“The death took place at Cleave House, Sticklepath yesterday morning of Mr. Albany George Finch. He was in his 82nd year. He was one of the best- known public men in the district, a devoted member of the Methodist Church, and a Liberal. A magistrate, chairman of governors of Okehampton Grammar School, and long-standing member of Okehampton Guardians Committee.” The list of mourners hints at wider family members and friends as well as representatives of organisations he was involved with..

The death was certified by Dr C.J.Sharp. At that time village doctors would have used a microscope to help diagnose illness. He said the cause of death was ‘Leuco-Erythroblastic Anaemia’, a diagnosis based on the microscopic appearance of the blood, one commonly associated with advanced cancer. Albany was buried in Sticklepath with his first wife Mary.

Ralph was his nephew, and right hand man in the business. Albany’s will is largely concerned with the business and what will happen to that. Clearly as the end of the second world war was approaching economic times were hard, rationing was in place. Albany was also aware that the production of tools by hand was becoming outdated, he and his brothers had already diversified considerably. The wording of the will is very gentle in regard to continuing the business if the local relatives want to, and what to do if, or when, they don’t want to. Albany left the proceeds of the business equally to his 4 children. Wills can potentially give a huge amount of information about the situation and family dynamics.

Sometimes, for example if the eldest son has already been given support to set up in business he may be mentioned in the will but appear to be unequally treated. There can be other reasons for an unequal split, for example grand estates tended to go to one person so it would not be split up and lost.

Beatrice Mary Bowden, Mrs William Hellier, who we met in the last post, was more organised – making her will in 1967, 2 weeks before her 87th birthday, at a cost of one pound and a shilling (a Guinea). She lived a further 5 years.

Her mother Mary Ann Bennett, Mrs Emanuel Bowden, born in 1861, was even more organised, making her will in 1935, she continued to live until 1949. Her solicitors charged just 5 shillings (25p).

The executors account for probate outlines other costs associated with the death and administration. In 1972, the year after decimalisation, Redstone’s charged just under £60 for Beatrice’s funeral, with almost £5 additional funeral expenses claimed by the executors. Probate Court fees were £3.30. The solicitor charged £32 including VAT. She left her estate to be divided between surviving siblings.

What a dramatic difference in costs less than 50 years later! Not only that but we no longer pay our dues in stamps, long gone are the threepenny bits and 10 shilling notes of my childhood and £1 notes. Local shops no longer send a monthly bill to regular customers. Cash is hardly used in these Covid times, but in 1972 credit cards were frowned upon by many. (Barclay introduced credit cards 1966 in UK). Debit cards weren’t introduced in UK until 1987. No one in 1972 imagined we would do most of our ‘transactions’ with the wave of a phone, a fingerprint, or click of a computer button!